The 1990’s marked a major turning point in the world of rock music as sounds and artists that had previously been labeled as fringe or alternative moved into the mainstream. Vastly different from the big hair sporting, spandex-clad glam rockers of the previous decade, 90’s alternative artists brought a different aesthetic to the music and the attitude that matched up perfectly with Generation X as they came of age and found their voice.

While the music was certainly the main factor that drove the revolution there were several inflection points that led to more mainstream awareness of the alternative artists and sounds. Here’s a look at some of the forces that came from outside the studio. 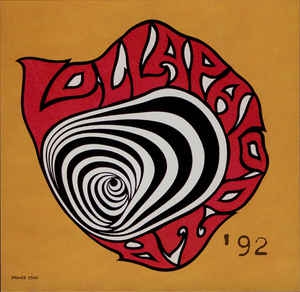 Although they sound like a 90’s alternative act, only one of Jane’s Addiction’s two studio albums, Ritual De Lo Habitual was released in the decade. Their first album, Nothing's Shocking came out in 1988. After a 13-month long tour for the second album, the band members were no longer getting along, and a farewell tour was planned.

That tour became the first ever Lollapalooza and featured a diverse lineup of acts that were part of the growing alternative scene including Siouxsie and the Banshees, Nine Inch Nails, the Butthole Surfers, Living Color, the Rollins Band, the Violent Femmes, and Ice-T's Body Count. It turned out to be a massive success leading to awareness and MTV play for Jane’s Addiction as well as an outlet for fans of alternative music to have a place to gather.

The tour became an annual event, initially curated by Farrell. In years that followed bands that were starting to have commercial success like the Red Hot Chili Peppers, Pearl Jam and Soundgarden headlined. But the lineups also gave exposure to many new acts such as Rage Against the Machine, Tool, Primus, Dinosaur Jr., The Smashing Pumpkins, and others to mainstream crowds they never would have reached without the opportunity this tour afforded them. Many bands that are now household names had their careers propelled by Lollapalooza. 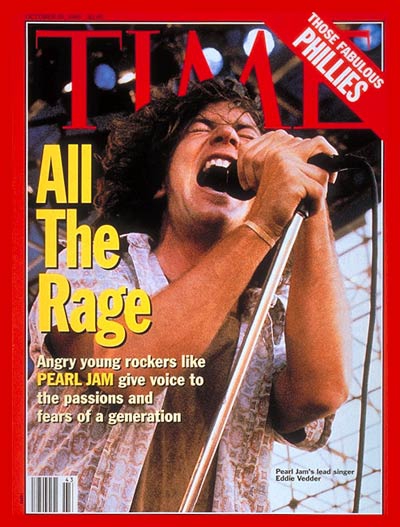 When people talk about Seattle’s grunge music movement the discussion often turns to Nirvana releasing “Smells Like Teen Spirit” or the massive impact of Pearl Jam’s album 10. But as big as both of those moments were, two years later both bands released their second albums, and that also became a major turning point when Time Magazine took notice.

The words “All The Rage” were splashed on the cover along in bright yellow with a picture that captured Eddie Vedder grabbing his microphone in two hands in mid-scream. The sub headline read, “Angry young rockers like Pearl Jam give voice to the passions and fears of a generation.”

Despite being anointed as the spokespersons for the generation, neither Vedder nor Kurt Cobain spoke to Time for the article. In fact, the members of Pearl Jam have repeatedly made it clear they hated being on the cover. Regardless, the fact that a mainstream publication like Time, speaking to an older audience, wrote about grunge and alternative music pushed the awareness of 1990’s alt-rock even further into the mainstream. 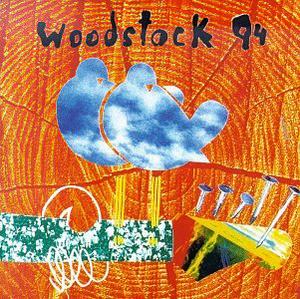 In 1994, a cultural touchstone of the baby boomer generation, Woodstock, turned 25 years old, and the music industry was not going to miss an opportunity to celebrate the milestone, and make some money. Woodstock 94 was held about 70 miles west of the original location at Winston Farms outside of Saugerties, New York. Billed as “two more days of peace and music” and using artwork that mimicked the original festival’s dove sitting on the neck of a guitar, the promoters sold about 165,000 tickets to the event. But much like its namesake in 1969, insufficient fencing and security measures made it easy for people who hadn’t bought tickets to enter the grounds. The final crowd is estimated to have been upwards of 500,000 people.

While a mixture of overcrowding and severe weather made the festival anything but smooth logistically, the music continued on with performers came from a variety of eras including some acts that performed at the original festival like Crosby, Still and Nash and Joe Cocker. But a large part of the lineup was made up of alternative rock acts like Nine Inch Nails, Green Day and The Cranberries.

Alternative Goes to the Movies

Hollywood also did its part to push grunge and alternative music further into the mainstream by releasing two movies that at least attempted to chronicle Generation X as defined by their musical tastes. 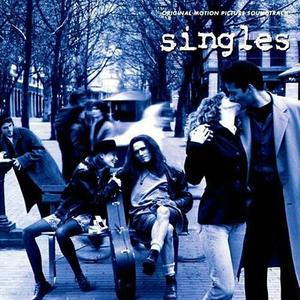 The first was Singles. Released in 1992 it was a typical romantic comedy wrapped around the lives of a group of Gen-Xers based in Seattle. The movie featured appearances from Eddie Vedder, Chris Cornell, and other members of Pearl Jam, Soundgarden and Alice in Chains, all of which were also featured on the soundtrack.

Then in 1994, Reality Bites was released. It similarly followed the romantic trials of a group of twenty-something friends trying to find their way after college. But while it didn’t feature actual band members like Singles, it was another mainstream look at Generation X and included a heavy dose of the more mellow side of alternative rock throughout the movie with a soundtrack that included Lenny Kravitz, Dinosaur Jr., Crowded House, Lisa Loeb, and others. 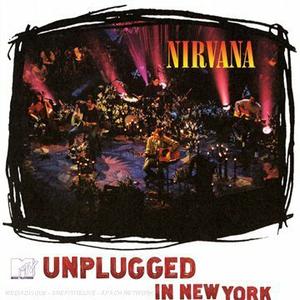 The final, and most unfortunate, event that propelled alternative into the mainstream was the death of Kurt Cobain on April 8, 1994. Cobain, who has struggled with drug and health issues – both mental and physical -- was found dead in his home after having taken his own life with a self-inflicted shotgun wound.

While many musicians have died before their time, what makes Cobain’s death relevant to this discussion is the resulting outpouring of grief that followed his passing. The angst in his music mixed with the social and personal issues he wrote about, had made him the voice of a frustrated Generation X that found itself sitting in the shadow of the baby boomers. The attention his death received was perhaps the biggest, and definitely the saddest, event that illustrated the influence and power of alternative rock for people who might otherwise have been unaware.

While the change in tone and style that classic alternative rock represents, as compared to 80’s rock, was certainly driven by the musicians and the music, these events and cultural moments played a role in spreading the word and taking them from the fringe to the mainstream.

Hear the sound of 90's alternative today and every day, right here on AccuRadio!