Five-Star Radio is  a brand new way to experience AccuRadio! This is an unlockable feature available to logged-in users who have rated at least 20 songs by using the AccuRadio star ratings feature to tell us what you think of the music you hear. We then take all of your four or five star rated songs, and create a unique channel just for you! It's all your favorite tracks, from across all the AccuRadio channels you enjoy, in one channel.

Where can I find my Five-Star Radio?

When visiting our website, you can find Five-Star Radio by clicking on "My Channels." It will always appear at the top of your Favorites. If you've unlocked the channel, it will also always appear in your History and Favorites on either our iOS or Android apps.

I'm on the website, but my Five-Star radio is greyed out and I can't listen to it.

To listen to a channel made up of your highly-rated songs, you need to rate songs! Make sure you're logged in, enjoy your favorite AccuRadio channels, and rate the music you hear. You can see how many songs you've rated so far beneath the ratings stars at the bottom of the screen. When you've rated at least 20 songs, your Five-Star Radio channel will "unlock" and be available.

How close am I to unlocking Five-Star Radio?

In the music player, we'll display the total number of songs you've rated just below the rating stars. You can also see your total by selecting "View rated songs" from the Settings menu (the gear icon in the upper right corner of the screen).

How do I rate songs?

On our website, in the media player that appears at the bottom of page when a song is playing, just to the right of the Blend, Pause, and Skip buttons, you’ll see an outline of five stars. Click how many stars you want to give the song. If the stars have already been filled in, you’ve rated that song before. Feel free to change the rating at any time. (On an iPad, click the button to the left of the play/pause control with three horizontal dots on it to find the song rating feature.)

I've rated a bunch of songs, but it says I don't have enough highly-rated songs.

Can I add more music to my Five-Star Radio?

Yes! You can keep adding tracks to Five-Star Radio after you've unlocked it. When you rate a song 4 or 5 stars, that automatically adds it to your Five-Star Radio playlist. This applies to all songs, whether you're giving a new rating, or changing the rating of a song you've rated before.

I know how to add songs to my Five-Star Radio. But I've changed my mind on some songs I'm hearing on the channel. Can I get rid of them?

Certainly. When you hear a song you no longer want to hear on Five-Star Radio, simply change its rating to something other than four or five stars.

I have a lot of music in my Five-Star channel, but sometimes I'll hear songs more than once in a day. What's going on?

Under the rating stars in the music player, you'll see the number of songs you have given any rating at all. The songs collected in your Five-Star channel will be only those you've rated 4 or 5 stars.

Can I blend Five-Star Radio with other channels?

No. Five-Star Radio cannot be blended.

Does Five-Star Radio include Holiday music?

When we launched Five-Star Radio in July 2017, we filtered out songs in our Holiday category from your Five-Star Radio channel, even if you've given them a rating of four or five stars. The surveys we did while developing this feature let us know that most listeners don't want to hear Holiday music in the summer and fall.

We have now made it possible to add those songs back in! There is a toggle button in the music player which says "Include Christmas songs?" It is set to "No" by default. You can find it just to the left of the Play button, the same place where other channels have the Blend button. Note that the number of songs included in your Five-Star Radio channel will change when you filter Holiday / Christmas songs in or out.

If you've only ever rated Christmas songs on your current account, you'll need to rate at least 16 regular (non-holiday) songs. At that point, you can launch the channel and turn the toggle to "On."

For example: For an account which has rated 19 Christmas songs and one classic rock song, Five-Star Radio will be unlocked, but since Holiday / Christmas songs are NOT included by default, an error message pops up telling you to rate more songs. 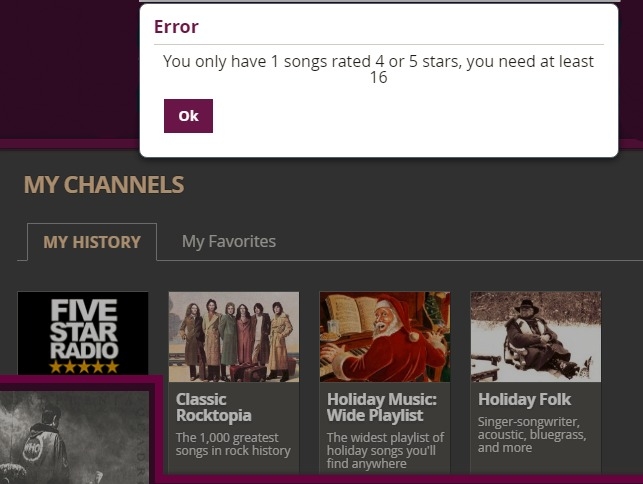 First, please make sure you are logged in via your usual method. It is possible to log in using either an email address or Facebook. Ratings for each login method are saved separately. So if you most often log in with your email address, your Five-Star Radio will not be visible (and vice versa).

Can you put mp3s of every song in my Five-Star Radio on a device and sell it to me?

Unfortunately, we can’t. But any time you’d like to take a look through your ratings history (by clicking "View rated songs" on the Settings menu), you can use the links we've provided to buy some of your favorite music.